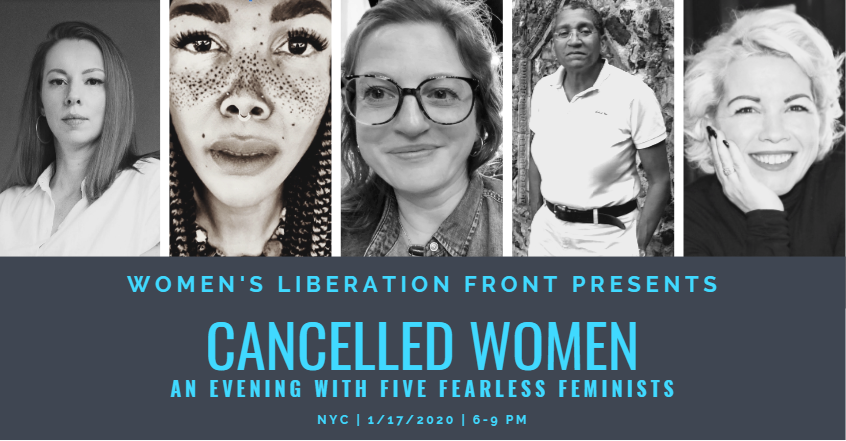 “What would happen if one woman told the truth about her life? The world would split open,” wrote poet Muriel Rukeyser in 1968. Since then, woman after woman has told the truth. Propelled by collective pain and inchoate rage, women found the words, saw the pattern called politics, created theory, and built a movement to liberate women.

But we are now living in a time of vicious backlash against feminism. A growing wave of misogyny from the Left is celebrating prostitution, normalizing sexual sadism, re-stigmatizing lesbians, and gleefully erasing women in language and law. The consequences to anyone who speaks out are swift and severe, from deplatforming to death threats.

Canceled Women will feature an evening of women who have refused to be silenced by the authoritarian Left.

This event will bring a truly radical feminist analysis of gender identity to the Pacific Northwest. To make this possible, we need your help. Our costs for this event include:

* Honorarium for our presenters

This is a grassroots event, launched by people who believe the voices of dissenting women have been excluded from mainstream coverage. Please donate to support us and our ongoing work fighting for women's liberation. Even a dollar helps us get closer to our goal, and any funds in excess of the event costs will support WoLF’s advocacy for the sex-based rights of women and girls.

Dominique Christina is a writer, performer, educator, and activist. She holds four national titles in the three years she has been competing in slam, including the 2012 Women of the World Slam Champion and 2011 National Poetry Slam Champion. Her work is greatly influenced by her family's legacy in the Civil Rights Movement; her grandfather was a Hall of Famer in the Negro Leagues, while her aunt, Congressional Medal of Honor recipient, was one of the Little Rock Nine.

Libby Emmons is a writer and mother in Brooklyn, NY. After years of writing plays and making theater in downtown New York, she is now a Senior Contributor for The Federalist and The Post Millennial, and a contributor to Quillette, Spectator US, The American Conservative, and Unherd. BA Sarah Lawrence College; MFA Columbia University. @li88yinc

Linda Bellos was born in London in 1950, to a white Jewish mother and a black I Nigerian father. She has been an activist, challenging inequality and injustice for over 50 years. At 35 she was elected Leader of Lambeth Borough Council in London. She has advised the Metropolitan police and British army and provided Diversity training to many organisations.

Meghan Murphy is an internationally acclaimed journalist in Vancouver, BC, and the founder and editor of Feminist Current.

Natasha Chart is the board chair of the Women’s Liberation Front (WoLF.) WoLF is a radical feminist organization dedicated to the total liberation of all women.

Posie Parker is the founder of Standing For Women. Posie was interviewed under caution by the British police in early 2018 and this propelled her into more visible activism against the silencing of women and the mutilation of children’s bodies through “transgender” medical interventions. Posie is the woman who "been there, done that and *made* the t shirt".

Our speakers have received death threats and hate mail for simply voicing their beliefs. Because of this, we have additional costs related to security. This added burden means that your support and donations matter all the more. Please donate, and even if you can't donate, please share with friends and acquaintances who may want to attend!